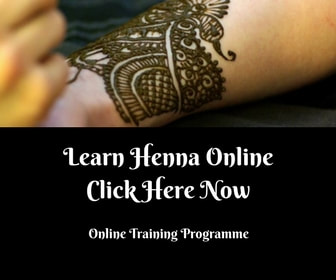 Cosmetic tattoos are semipermanent makeup, such as eyeliner and lip color, tattooed on the face. These tattoos use plant-derived inks that are deposited in the superficial skin layer, resulting in a tattoo that lasts up to five years. Temporary tattoos come in a wide variety of designs and patterns. Unlike permanent and semipermanent tattoos, most temporary tattoos can be applied and removed by the wearer. These tattoos are burnished onto the skin and secured with an adhesive. Most temporary tattoos can be removed with soap and water or acetone, depending on the adhesive. Another type of temporary tattoo is henna or mehndi, which is a shrublike plant that grows in hot, dry climates, mostly in India, North African countries, and Middle Eastern countries. The leaves are dried, ground into a powder, and made into a paste, which is applied in desired designs to the skin. After several hours of drying, a reddish-brown stain temporarily tattoos the skin. This tattoo begins to fade as the skin exfoliates and renews itself.

TEA GOWN The tea gown is an interior gown that emerged in England and France in the 1870s at a time when increased urbanization affected social behavior. The growing number of etiquette manuals and lady's periodicals produced at this time contributed to the revival of teatime by the middle classes and to the adoption of a whimsical type of gown worn by hostesses in their homes at five o'clock tea. Marked by Victorian eclecticism, this unique gown often incorporated elements of fashionable European dress from previous centuries, with exotic fabrics and stylistic components of foreign dress. The tea gown provided respectable women with an outlet for fantasy and innovation within the codified system of nineteenth-century dress and behavioral codes.

The nature and origin of teatime had considerable impact on the development of tea gowns. As tea was worth its weight in gold at the time of its introduction in Europe in the early seventeenth century, its consumption was reserved for the elite. Although this exotic beverage had become widely accessible in Europe and America by the mid-eighteenth century, tea drinking had been established as a class-conscious social event through which a network of selected individuals attained group membership. A sign of hospitality and politeness, serving tea to one's friends and relations retained an air of gentility and exclusivity that appealed to the rising middle classes. This mode of refined social entertainment entailed distinct refreshments, equipment, and rituals and would foster the emergence of a distinctive form of dress.

Specialization was also perceptible in interior spaces and manners, and gave rise to the development of the dining room and parlor. Both have significance in the tea gown's rise in popularity. The emergence of the dining room and the refinement of table etiquette in the mid-nineteenth century led to increased cost and formality when hosting dinners to repay social obligations and entertain friends. In comparison, teatime was far less costly and formal and could host a greater number of individuals, as custom required that guests stay between fifteen minutes and half an hour. With increased urbanization, social circles expanded rapidly and teatime became a more accommodating and feasible event in a system of reciprocity that was often daunting, and where hosting anxieties were on the rise. The parlor was in nature more flexible and became a stage for public display where teatime was held. As socializing was frequently conducted in private residences, home was also a public stage, and many late nineteenth-century parlors aimed to convey to visitors the owners' artistic sensibilities. This contributed to the popularity of the tea gown, which was considered to be the appropriate form of dress for artistic and exotic features. Many such gowns were aesthetically coordinated with their surroundings. This also influenced artist James Abbott McNeil Whistler and architect Henry van de Velde to design tea gowns for sitters or clients.

As teatime had long been conducted in private residences, the type of gown worn for the occasion was derived from interior gowns, which fit into the category of "undress." Nineteenth-century dress code was mainly divided in three categories: "undress," "half dress," and "full dress." Although this classification suggests a crescendo from least to most formal, elevated levels of formality existed within each category. As both men and women participated in social tea-drinking, and because teatime could be attended by distant acquaintances, tea gowns worn by hostesses did not stray far from Victorian propriety and became very formal interior gowns that were fit for public exposure. The state of "undress" could thus include gowns that were loose or semi-fitted to those, like the tea gown, that could be as fitted as other day and evening dresses. However, artistic elements such as Watteau pleats (wide pleats emerging from the center back neckline borrowed from eighteenth-century gowns) and draped front panels were among the features often added to a fitted understructure that gave the impression of looseness. These elements gave way to very elaborate interior gowns that were not labeled as "tea gowns" until the late 1870s.

The earliest labeled tea gowns discovered to date appeared in the 1878 British periodical, The Queen, The Lady's Newspaper. These one-piece gowns with long sleeves, high necklines, and back trains were made to give the impression of being closely fitted open robes with under dresses. One had the Watteau pleats and was named "The Louis XV Tea Gown." This is of interest as it names its source of inspiration and reinforces the eighteenth-century salon connection that was mentioned by writers of the period, and helped to intellectualize and elevate the status of teatime. Such tea gowns co-exist with numerous other elaborate interior gowns of the same style, which, until the turn of the century, were as likely to be named with the new term "tea gown" as they were to be labeled by the variant French term, robe de chambre. The words robe and toilette were also used interchangeably, as were chambre and intérieur. Terminology is thus a problem because tea gowns were derived from interior gowns, but not all interior gowns were fit to be worn in mixed company at teatime.

Nineteenth-century tea gowns seen in fashion plates followed the bustled styles of their times, and descriptions mentioned elaborate fashion fabrics and trims. This serves to differentiate these gowns further from other interior gowns. Although loose and artistic features were acceptable in tea gowns, their public use mandated the adoption of the fashionable and highly-fitted silhouette.

As wearing underpinnings such as bustles without a corset was not a Victorian practice, the contrived fashionable silhouette present in tea gowns observed in fashion plates and in surviving specimens in museum collections suggests that corsets were worn under some of theses gowns.

From the late 1870s to the mid-1910s, tea gowns were immensely popular. Their magnificence was on the rise and leading designers joined in with fanciful creations that could easily have been mistaken for fancy dresses.

As Edwardian dress gave rise to a love of different colors and fabrics and introduced Empire revival features in high fashion, a progressive blurring occurred. The appropriateness of historically inspired gowns with looser and exotic elements was no longer confined to teatime. This also expanded the tea gown's use to other day and evening events. As the revivalist Empire silhouette gained ground and exoticism became the rage, it became hard to differentiate tea gowns from other types of gowns. Changes also occurred in the physical settings of teatime, which migrated to newly-popular tea pavilions and helped the thés dansants of the 1910s supersede teatime in the home as the fashionable thing to do.

TECHNO-TEXTILES Techno-textiles are fabrics that incorporate new technologies and new functionality into a traditional textile material. Sometimes called "tech-textiles" or "technical fabrics," most techno-textiles have their roots in industrial or military applications. Technotextiles are employed in many different applications, ranging across biomedical devices, aircraft, automobiles, electronics, and more, including clothing and home furnishing.

Textiles are products basically constructed of fibers. These fibers are frequently twisted together (thousands at a time) to create yarns, and the yarns can be woven, knitted, or braided to make fabrics. When looking at a fabric, it is easy to forget that fabric is really made of thousands or millions of small fibers. However, the fibers are the most important component of the textile. The choice of fibers and yarns can change the behavior of the textile material. Most techno-textiles are developed at the fiber level. By modifying materials thinner than a human hair, the performance of a fabric can change dramatically.

Since the dawn of synthetic plastics, techno-textiles have been marketed. One of the earliest examples of fibers made for high-tech application is nylon. As the air force was developing as a significant component of the armed forces, parachutes became more and more important. Parachutes were made from woven silk fabric. Researchers were interested in developing a synthetic substitute for silk to control quality, source, and improve strength. Nylon was an ideal source and rapidly developed to satisfy this market.

Recognizing nylon as a silk substitute, however, quickly led people to consider other products made from silk as candidates for nylon. Stockings, which were extremely popular and rather expensive at the time, were identified as a likely market. The success was so great that the public started calling stockings "nylons" within a few years. The increased strength and durability of the nylon compared to silk made this a tremendous success.

By the early 2000s, nylon was no longer considered a techno-textile, but rather a commodity fiber. This continues to happen: as new technologies become commonplace and accepted, they cease to be considered high-tech. What at first seem like fantastic applications will likely, within years or decades, become commonplace.